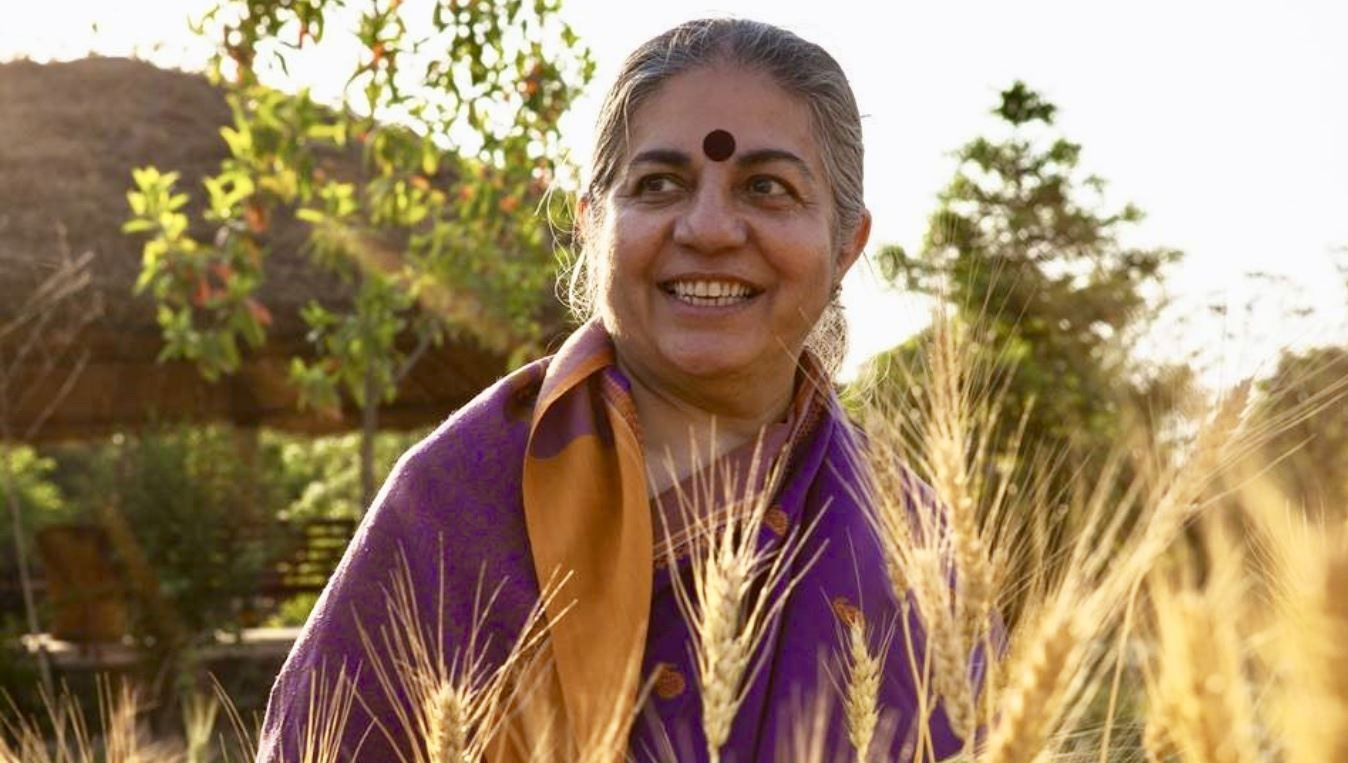 Everything I Need to Know I Learned in the Forest

My ecological journey started in the forests of the Himalaya. My father was a forest conservator, and my mother became a farmer after fleeing the tragic partition of India and Pakistan. It is from the Himalayan forests and ecosystems that I learned most of what I know about ecology. The songs and poems our mother composed for us were about trees, forests, and India’s forest civilizations.

The lessons I learned about diversity in the Himalayan forests I transferred to the protection of biodiversity on our farms. I started saving seeds from farmers’ fields and then realized we needed a farm for demonstration and training. Thus Navdanya Farm was started in 1994 in the Doon Valley, located in the lower elevation Himalayan region of Uttarakhand Province. Today we conserve and grow 630 varieties of rice, 150 varieties of wheat, and hundreds of other species. We practice and promote a biodiversity-intensive form of farming that produces more food and nutrition per acre. The conservation of biodiversity is therefore also the answer to the food and nutrition crisis.

Biodiversity has been my teacher of abundance and freedom, of cooperation and mutual giving.

Navdanya, the movement for biodiversity conservation and organic farming that I started in 1987, is spreading. So far, we’ve worked with farmers to set up more than 100 community seed banks across India. We have saved more than 3,000 rice varieties. We also help farmers make a transition from fossil fuel and chemical-based monocultures to biodiverse ecological systems nourished by the sun and the soil.

Today, at a time of multiple crises intensified by globalization, we need to move away from the paradigm of nature as dead matter. We need to move to an ecological paradigm, and for this the best teacher is nature herself.

In “The Religion of the Forest,” Rabindranath Tagore, India’s national poet and a Nobel Prize laureate, wrote about the influence that the forest dwellers of ancient India had on classical Indian literature. The forests are sources of water and the storehouses of a biodiversity that can teach us the lessons of democracy—of leaving space for others while drawing sustenance from the common web of life. Tagore saw unity with nature as the highest stage of human evolution.

It is this unity in diversity that is the basis of both ecological sustainability and democracy. Diversity without unity becomes the source of conflict and contest. Unity without diversity becomes the ground for external control. This is true of both nature and culture. The forest is a unity in its diversity, and we are united with nature through our relationship with the forest.

In Tagore’s writings, the forest was not just the source of knowledge and freedom; it was the source of beauty and joy, of art and aesthetics, of harmony and perfection. It symbolized the universe.

The forest also teaches us enoughness: as a principle of equity, how to enjoy the gifts of nature without exploitation and accumulation. No species in a forest appropriates the share of another species. Every species sustains itself in cooperation with others.

The end of consumerism and accumulation is the beginning of the joy of living.

The conflict between greed and compassion, conquest and cooperation, violence and harmony that Tagore wrote about continues today. And it is the forest that can show us the way beyond this conflict.

VANDANA SHIVA is the Founder and Director of the Foundation for Science, Technology and Natural Resource Policy. and Board Member of the International Forum on Globalization.

Besides being a physicist, ecologist, activist, editor, and author of numerous books, Vandana Shiva is a tireless defender of the environment. She is the founder of Navdanya, a movement for biodiversity conservation and farmers’ rights. Shiva fights for changes in the practice and paradigms of agriculture and food: “I don’t want to live in a world where five giant companies control our health and our food.”

Intellectual property rights, biodiversity, biotechnology, bioethics, and genetic engineering are among the fields where Shiva has contributed intellectually and through activist campaigns. During the 1970s, she participated in the nonviolent Chipko movement, whose main participants were women. She has assisted grassroots organizations of the Green movement in Africa, Asia, Latin America, Ireland, Switzerland, and Austria with campaigns against genetic engineering. Shiva has also served as an adviser to governments in India and abroad as well as non-governmental organizations, including the International Forum on Globalization, the Women’s Environment and Development Organization, the Third World Network, and the Asia Pacific People’s Environment Network.

Her writings include Staying Alive, The Violence of the Green Revolution, Biopiracy: The Plunder of Nature and Knowledge, Monocultures of the Mind, Water Wars: Privatization, Pollution, and Profit, and Stolen Harvest: The Hijacking of the Global Food Supply, as well as over 300 papers in leading scientific and technical journals.

In 1993, she received the Right Livelihood Award, commonly known as the “Alternative Nobel Prize.” Other awards include the Order of the Golden Ark, Global 500 Award of the UN, Earth Day International Award, the Lennon Ono Grant for Peace, and the Sydney Peace Prize 2010.

In 2003, Time magazine identified Shiva as an “environmental hero,” and Asia Week has called her one of the five most powerful communicators of Asia.